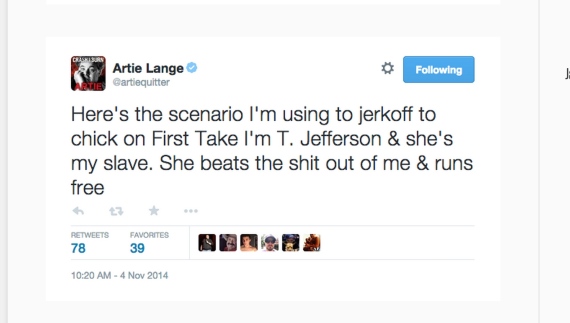 This will be a quick post because 140 characters just isn’t enough space to communicate effectively on this topic. In fact, the tweet above is only one of many it took Artie Lange to communicate his perspective on ESPN’s Cari Champion.

If you haven’t heard, comedian Artie Lange is up in arms because in response to his racist and sexist tweets, certain media outlets are refusing him space on their stages. Artie took to social media to condemn the “PC Police” (an emotive and silly term that deserves its own analysis) for continuing the “ruin” our country with their condemnations of his “comedy”.

See, here’s the thing, Artie. This is the way that speech in a public marketplace of ideas works. You get to say what you want to say (remember, we’re not talking about government censorship, so you can say just about anything) in the public sphere and people in that same public sphere get to respond. In this case, the things that you said offended people, as well they should. I suppose it’s easy to imply raping a slave and call that “comedy” when your ancestral history hasn’t included slavery and when you don’t have to be on guard against a rapist carrying groceries to your car in broad daylight every day. But that comedy comes from your specific social space that’s rolling in White and male privilege and that privilege is at the expense of others. So, in response to your “comedy”, others who took offense responded publicly, as they have every right to do. Now, where you take issue with these folks is not their ideas (I haven’t seen a response where you take on the complex issues of race and sex and class, you simply say, “It’s comedy”), but rather on the result of their speech on your career.

The corporate media owners, who tend to shy away from certain controversies because it can some times hurt their financial bottom line, have shunned you for a few days. That was their decision, not that of the “PC Police” you so stridently condemn. But it’s an easy out isn’t it? You can blame the group that disagrees with you for the actions of the corporate media owners, crying like Chicken Little that the “PC Police are ruining our world!”, instead of actually taking on the people who have wronged you.

And so this is where you lose me, a person who errs on the side of more communication about speech I don’t like and less censorship of it, even when I disagree vehemently with what someone is saying. You frame yourself and your “comedy” in this instance as “edgy”. You and your comedian ilk revel in controversy until it bites you in the ass and then you cry about the “PC Police” instead of pointing the finger at the real culprits–the corporate media who don’t give a shit about your “edginess” and who only want a better bottom line.

So, if you want to really be “edgy”, bite the hand that feeds you, dude. Bitch, moan, and complain about the corporate media that erred on the side of making money instead of the side of your freedom to say racist and sexist things, because that’s who did you wrong here. But you won’t do that will you? Because your edginess stops at your bottom line just like theirs does, doesn’t it? You’re not going to challenge your corporate owners. Instead, you’re going to blame the “PC Police”, which gets your fans all in an uproar but does nothing to actually address who did you wrong and what wrong they did.

Don’t like what the “PC Police” say about your work? Fine. Talk about it. Talk about it a lot. We’ll talk back. Want to keep continuing your work without concern for their perspectives about the language you use and the social realities it reifies and constructs? Go right ahead. But don’t whine and cry “PC Police” when there are corporate consequences for your actions. And until you can truly be edgy and take on those corporate interests for choosing profit over your right to speak freely in your work, quit blaming the people that didn’t make that decision and are only taking advantage of the same right to speak that you cling to so dearly in your pleas against the “PC Police”.

Now, to quote Lange’s tweet about the “PC Police”, I’ve gotta get back to “saving the world. Done. Peace.”

Given the tweet below where Lange says he doesn’t blame them, I think it’s safe to assume that Lange isn’t edgy enough to bite the hand that feeds. Since Comedy Central airs South Park, Brickleberry, Tosh.0, and other shows that do run edgy (and in the case of Tosh, I believe highly questionable) jokes about race and sex, I think that even Comedy Central understand that Lange crossed a line (later tweets indicate he may finally realize that a little, too) and that’s their right to decide. He had the choice to challenge the media giant on that decision and instead not only chose to attack those that disagreed with him but went on record “understanding” Comedy Central’s decision.